Is screen time educational or distracting? How to use it effectively? 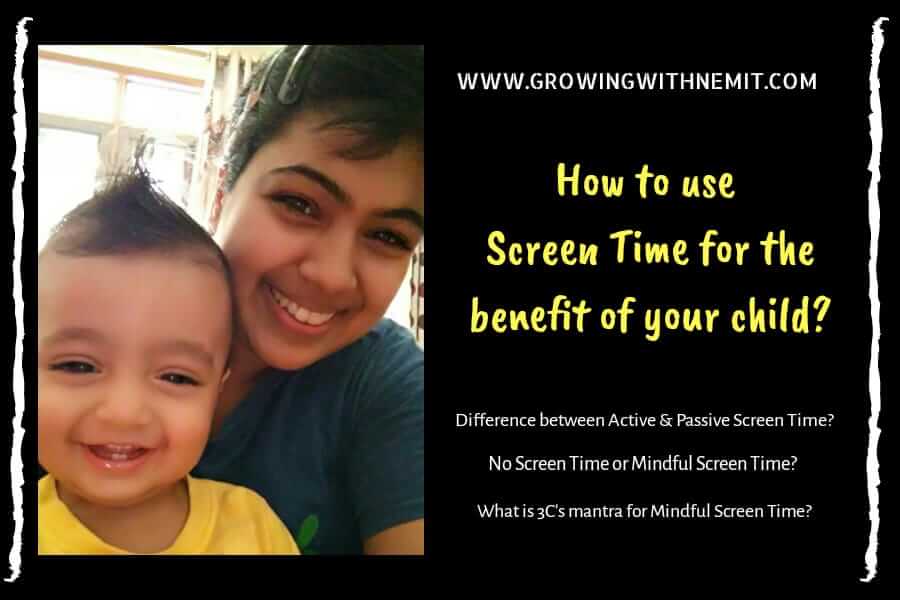 Updated on Dec’19: This is one of the most loved posts from the time when I’d just started blogging. Just like any other first-time new parent we had no idea about the ill effects of screen time. Or you may say we didn’t know whether it helps or hampers the child’s growth.

It was Nemit’s vaccination at 15 months when we met his pediatrician after a gap of 3 months. While asking some general questions about his health, she asked us how many words does he speak and how much screen time we are offering him.

Well, we were happily showing him 1-2 hrs of daily rhymes thinking that he is learning something good while watching TV. And I was using that time for myself. But I simply failed to observe that he was not learning any words from those songs. He would be glued at one place for 2 hrs, eyes on the screen with a blank expression on his face.

According to the doctor, at around 15 months he should be speaking at least 7-8 meaningful words and that list should keep expanding with each month. Now, this was alarming for us because Nemit was hardly speaking any words except for Mumma & Papa.

“It is recommended to avoid any screen media (TV, mobile phones, tablets, computers) for babies 0 to 18 months old” – WHO

She explained to us that the human brain is the least developed of our organ systems at birth. Most of its development occurs in the first two years of life. Neurologists have identified three types of stimuli that helps in brain growth.

(1) Babies need interaction with parents and other humans.

(2) They need to manipulate their environment (to touch things, to feel and move them).

(3) They need to do “problem-solving” activities.

Of these three critical forms of interaction, television provides none.

Our doctor then advised us to reduce his screen time gradually & bring it to zero in 10-15 days. Now, this was a BIG TASK for me. Because hey, I needed a break too & I had no help at home.

But being a mother, I know there is nothing which we can’t do for our little ones. We can fight the greatest battles for the well-being of our kids. Hence I took this challenge to see if it actually works or not. And alongside I started doing my research on screen time.

And I found out that there was already a lot of debate going on this topic.

Is staying away from screen really the best approach?

There is research that shows when parents make screen use an interactive, shared experience, it can become a tool for learning and the potential negative effects can be reduced.

But moderation is the key. Let us understand a bit about Screen time.

There is Passive Screen Time which is like watching cartoons or rhymes or movies. Kids’ TV has become little more than a tool for keeping children from tearing up the living room.

And then there is Active Screen Time which is like communicating via Skype or playing an interactive game but it should not take the place of activities and games that should happen in the real world of a child.

Simply by following the 3C’s mantra- the Content, the Context, and the Child.

In comparison to the high stimulation that media screen offers, real-life can seem slow and children can respond to it with boredom and inattentiveness.

Eliminating screen time is a choice for engagement over stimulation and activity over passivity. The choice is ours.

As per my experience, achieving zero screen time is possible but if you can’t do that try interactive screen time. I tried to involve Nemit in fun and interactive stimulation activities using the DIY approach.

It’s been 3 months after that visit to the doctor and since then we are following ‘zero screen time’. Within a month Nemit started speaking 5 new words, there is an improvement in his understanding of things, he happily copies the actions we do while singing rhymes.

I believe it’s not just the baby who is growing it is also ‘the parents’ who are growing & learning with them each day.

My Friend Alexa 2021 by Blogchatter

My Friend Alexa 2020 by Blogchatter